About Tandel Fund of Archives

Home > About Tandel Fund of Archives

About: ‘Tandel Fund of Archives’ (TFA) is a socially engaged archive and ethnographic Pop-up museum of the Koli tribes (fisherfolk) of Mumbai. We are an open artist collective, the Co-Founders of this collective are Parag Kamal Kashinath Tandel and Kadambari Anjali Mahesh Koli.

‘Tandel Fund’ in Chendani Koliwada, Thane (a central suburb of Mumbai) was founded by Tandel Families at the beginning of the 14th century to support the Koli people economically during their time of necessity. We are resuming this fund in the context of a pool of archives.

Koli (fisherfolk) tribes are original inhabitants of Greater Mumbai and Mumbai’s suburbs, their heritage on the seven islands span as far as back to the Stone Age. Their predecessors who have encountered the great regimes surge and fell around them, an invasion of colonialism and Imperialism. Since thousands of years Kolis have fished, rowed, and inhabited in these estuarial lands, as the realm around them has altered. They are edged by unsustainable infrastructure, these indigenous tribes of seven islands are struggling like the ocean around them because of the ever-encroaching megalopolis in their fishing grounds and villages, their rich estuaries are choking with metropolitan pollutants.

Currently, this community is going through the insecurity of post-displacement. There are more than two fifty Koliwada’s in and around Mumbai, each Koliwada has its own social and cultural practices. These villages are very much self-sufficient and self-sustaining lands, though the city has grown around them, these isolated villages have their own identities in Mumbai. An important part about Koliwadas is they never depended on the city’s so-called basic infrastructures. Koliwada’s have their rich natural resources and cultural existence. But in recent times these Koliwadas are being seen as the land of opportunity, these villages are sea-facing lands and others are discerning such lands as prime properties. Can we imagine the fisherfolk community without an oceanfront? We are very much concerned about the proper & ethical documentation of these indigenous tribes, whose rooted culture is on a verge of extinction. 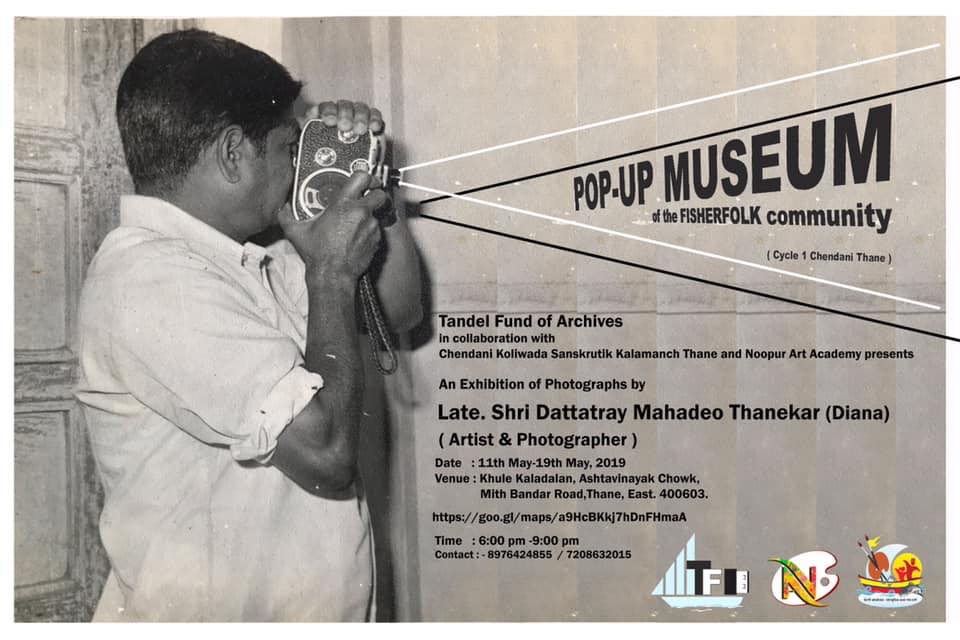 TFA Collective realized that there is no museum space for the indigenous peoples in this Megalopolis. Fishermen communities of Mumbai have a deeper knowledge of the ocean’s behavioral patterns, Kolis has a rich tradition and culture which needs to be documented and archived in various layers. TFA is a pool of archives, which aims to gather and document information on fishing communities in and around Greater Mumbai. The collective aims to work towards the exposure of this content through public art events in the social sphere which will be in the form of a Pop-Up community museum, It aims to forge connections with the local public sphere. The information collected in the pool will be accessible to the public for study, research, and interventions. We are closely collaborating with all the Koliwadas to archive information. Our aim is not just to work on historical documentation but also to intervene in the current times. The collective wishes to serve as an archival tool through which information and narratives of the community can be disseminated through various art forms, and act as a living museum of memory.

TFA Collective looks forward to collaborating with the community, as well as researchers and artists by organizing workshops/symposia, research camps, book publications, film screenings, and pedagogical conferences that operate in the public sphere.